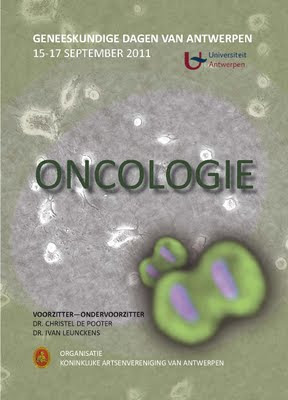 In this time of globalization the meaningful international exchanges among scientists, artists, and medical artists teaching Art and Science to a new generation of students have become of utmost importance. The opportunity for a real dialogue about experiences and visions central to their work is very often missing. The so-called ‘exchanges’ are all too often an exhibition, a publication and tell for finished products and productions, rarely encouraging open discussions between scientists and artists.
We are therefore pleased that this meeting and exhibition organized by the Art Researches Science - ARS program, the Biological and Medical Art in Belgium group (BIOMAB) and the European Medical Students' Association (EMSA) is convened for the second time during the Antwerp Medical Days at the University of Antwerp, bringing together representatives from a wide variety of disciplines.
The topic for the Antwerp Medical Days 2011 is ‘Cancer: Prevention and care for the patient as a person.’ Cancer is a global disease that should be battled against with all our forces, disciplines, backgrounds and abilities. And as you all know there is absolutely no time to lose!
The art work represented in the Q building, room V2 on the UA Campus Drie Eiken ‘not until we’ve beaten cancer’ is research based, observing and inspired by the human body in all its diversity; life and nature in all its beauty, strength, fragility, disease, mortality and death.
This scientific meeting and medical art exhibition offers a platform for future networks, workshops and co-productions between young artists, medical artists and scientists. It will also act as an opportunity for regional and local initiatives to be reinforced through trans-continental forum of ideas.
We wish all participants an exciting time in Antwerp and hope that these three Medical Days will be productive and successful for the arts and the sciences.
Pascale Pollier-Green, biomedical artist and president BIOMAB
Els Gielis, president Antwerp Medical Students’ Congress AMSC 2011
Ann Van de Velde, hematologist, BIOMAB
Francis Van Glabbeek, orthopedic surgeon, BIOMAB
Website: BIOMAB

Pictures: click here
-----
Artists & Works (in Progress)
Anneke Blennerhasset
2 COLOUR LITHOGRAPHIES, 2011
70 x 51 cm (3)
MAPPING SYNERGIES, 2011
Animation
Length: 1 minute
I am very interested in science, using it as an inspiration for the majority of my works. Psychology also features within this framework of ideas and how the mind progresses in thought and formulates an idea that grows and develops. In this instance I am honing in on the destructive part of human nature and how such things manifest and take over the mind eventually self destructing. I wanted to translate such ideas in my work so I started looking to the growth of different substances and organisms, one of these being cancer. I was researching just how such small seemingly innocent 'seed' can grow and spread rapidly taking over the whole body and completely breaking it down. I document this progression of change and how it can affect ones physical and mental state, changing an image from something quite meek and delicate to something which dominates and overpowers. 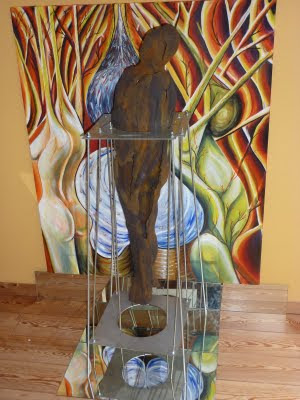 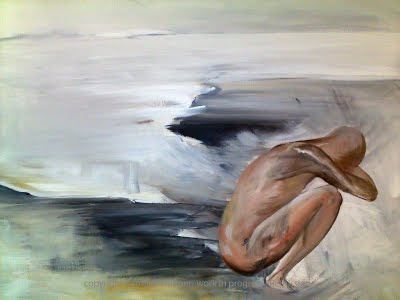 REMISSION, 2011
Acrylics on canvas
80 x 80 cm
Being the daughter of a pianist and a ballerina, I grew up in a world of visual art, dance, music and poetry whereas the tender perspective on life never failed to look beyond the obvious. This would translate itself in my later work as a visual artist and writer, where capturing the lives of lost ones in eulogies as mere outstretched poems and perform them at funerals by herself would become a tender caress of death and the people surrounding it. As where theatre and dance were an everlasting inspiration, this influence still shows in the evaporating figures of paintings, as it does in the longing for what might be unreachable, either towards ‘the other world’ or the missing of fulfillment of a life yet to be lived, not ended. As death creates a state of solitude too, this emotion is often occurs in my work as does the grief of having ‘to let go’. 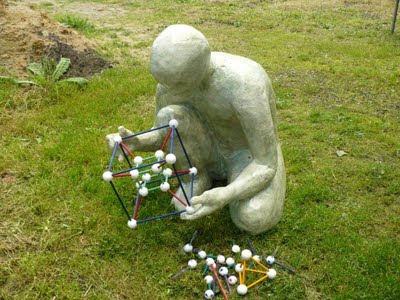 DANIEL, 2011
Polyurethane, glass fibre and resin – painted between layers of resin
60 x 60 cm
I was born in beautiful South Africa, a cauldron of culture, from which I draw inspirational creativity. I'm inspired by the stuggles of and the successes of a nation of extemes. My work is often also demonstrating extremes. Using cardboard and making a tree for example. Or using bricks, that are generally very hard and making something that looks like soft clay thrown against the wall.
My aim is to force people to look beyond what the eye first sees and contemplate, for a moment, a different point of view. Daniel is a young man representing a people who are searching and discovering solutions and answers. He has no natural humanoid colour because he represents all cultures, social standing and colour. I've made him young to show the innocent manner that we should all approach things that we don't understand but want to comprehend, whether it be sickness and desease or trying to figure out time and space in a fourth dimention. Daniel holds a completed tesseract in his hands... a success, an advancement of knowledge through application. A tetrahedron lies in front of him as a discovery in the past that he has built on. Bits of un-assebled/undiscovered pieces lie scattered; an idea waiting to be uncovered... a truth to be realised. The fact that there are people applying themselves to beating cancer means, undoubtedly that we are beating cancer.
Özkan Özsarlak 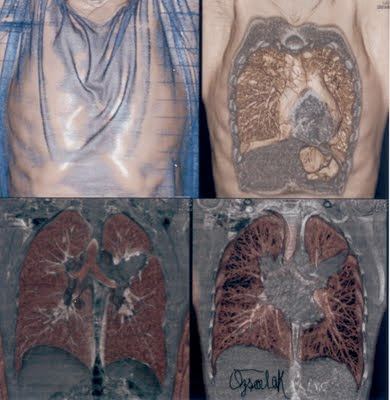 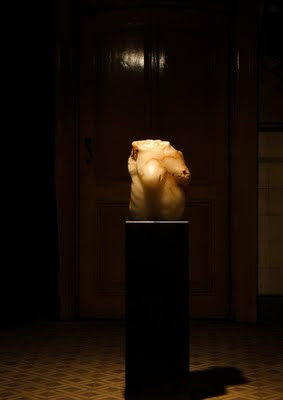 BATTLE OF THE REMAINS, 2010
Alabaster carving on Belgian Greystone
25 cm x 20 cm x 18 cm
Balancing the line between being and not being,
looking for the confrontation with everybody's humanity:
the beauty and ugliness of the constantly changing body,
the strength of muscles, the aging skin, mortality, and decay. 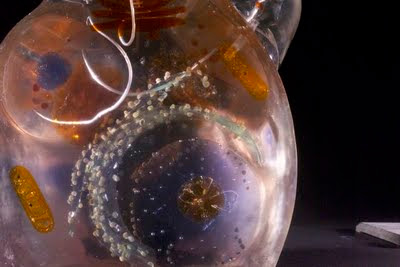 MELANOCYTE, 1998
Clear resin
114,5 cm x 61,5 cm x 105 cm
My work is research based, I make observations, I experiment and take notes, I draw, paint, and sculpt. The internal and external human body in all its diversity, life and nature in all its beauty, strength, fragility, disease, mortality and death all this and more is what inspires me. My materials are clay, plastoline, sculpey, wax, oil paint, silicone, epoxy, polyester, human hair and other natural materials, graphite pencil, ink, watercolour, Photoshop and illustrator, etc... New technologies and philosophies are my muses. Quantum physics, nano technology, and animatronics I find very interesting and are important in my work.
MELANOMA, 1999
Aquarelle painting 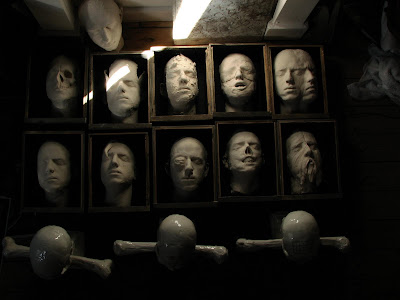 PATHOLOGICAL LOOK-ALIKES, 2011
(Pathologische dubbelgangers)
Pathological Look-alikes” consists of a series of ten heads with multiple diseases inflected upon the faces. The total size of the work depends on the composition, because the boxes can be placed in different formations. Each ceramic head is numbered and carefully placed in a box of 24 x 31 x 10 cm. The boxes and heads are crafted according to the medical tradition of the 19th century science. Each one is representing the terrifying result of disease on the human body. They are created as an illustration of pathological aesthetics: horrible and beautiful, fascinating and repulsive. Each of them holds the truth of mortality and each of them will have each a different effect on the spectator. The human body is a fine and fragile mechanism, but on the other hand, much more resilient then one would think.
With my work I want to refocus the spectator gaze on the human body and its complex system. At present we are experiencing a major cancer epidemic. We live much longer than before, but modern living plays a great role in the fact that humans die more of cancer. We are constantly exposed to pollution. Because of all kinds of toxins on food and clothes. Some of them are airborne and others come in direct contact with our skin. So modern living includes a higher rate of cancer related mortality. On the other hand there is the improved and advanced medical system and treatments, more efficient than ever before. The progress of disease and medical science is constant in motion as the earth itself. Human beings are living much longer then they were intended to by nature, and there is no cure for old-age. We are not meant to live on forever and we should accept this fact. But we can fight and reduce the risk on cancer. Humanity has to take up the responsibility for itself and its environment by living much more ethically and consciously. 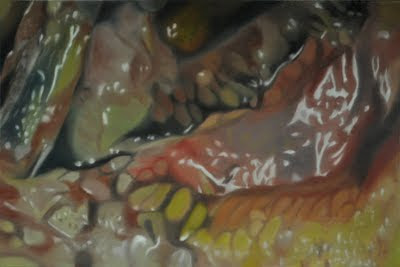 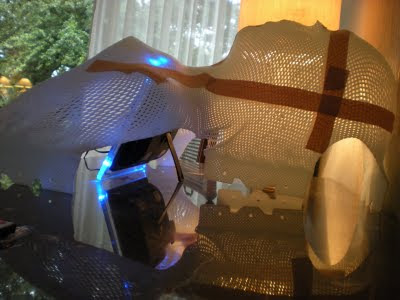