I would like to extend to you and your collaborators, my invitation to attend the forthcoming informal seminar of Dr. Ke Wang, who is guest of my lab.
The seminar is going to be held at the University of Antwerp, on April 15th at 14:00, in the small library of the fifth floor, building T, Campus Drie Eiken.

Dr. Wang received her PhD by Stanford University in 2006, and she is currently with the "Minimally Invasive Healthcare" group of Philips Research Europe (The Netherlands).
Her pioneering research anticipated by ~5 years the first (European) neurobiological investigations of carbon nanotubes as a novel material for future neuroprosthetics.


Title and abstract of her talk are indicated below: 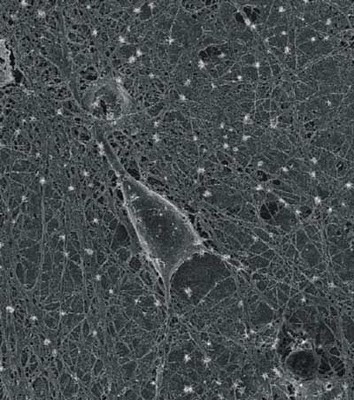 TSEM micrograph of a cultured rat hippocampal neuron grown on a layer of purified carbon nanotubes. (Image: Laura Ballerini, University of Trieste)
..
Electrical stimulation of nerve cells is widely employed in neural prostheses (for hearing, vision, and limb movement restoration), clinical therapies (treating Parkinson’s disease, dystonia and chronic pain), as well as in basic neuroscience studies. In all these applications, an implanted microelectrode array transmits electrical signals to the neurons and modulates their behavior. These stimulating electrodes need to be biocompatible, stable, micro-scaled, and capable of delivering high current while remaining electrochemically safe.

This work presents a novel neural interface using multi-walled carbon nanotubes (CNT) as microelectrodes. We synthesized self-assembled CNTs by thermal chemical vapor deposition. The CNTs formed pillars of controllable height projecting orthogonally from the surface. Using conventional silicon-based micro-fabrication processes, these CNT ensembles were integrated onto pre-patterned microcircuitry. The geometry and location of the CNT microelectrodes could be precisely defined.
The electrochemical properties of the CNT microelectrode array were characterized by cyclic voltammetry, impedance spectroscopy, and potential transient measurements. Compared to platinum and iridium oxide neural electrodes, these CNT microelectrodes had a wide electrochemical operational window, competitive charge injection limit, and operated capacitively without faradic reactions. These properties have become increasingly important, as applications in the central nervous system require a significant reduction in electrode size. Different surface modification techniques, such as thermal oxidation and non-covalent binding, were investigated to functionalize the CNT electrodes and the active interfacial area was considerably increased.

The biocompatibility of CNTs was assessed by in vitro neuronal culture. Retinal ganglion cells and hippocampal neurons were cultured on CNT substrates, and showed comparable viability and neurite outgrowth to cultures on Petri dish controls. In vitro stimulation of primary neurons with the CNT microelectrode array was demonstrated for the first time. Neurons could be repeatedly stimulated, indicating good cell excitability and electrode condition.
In conclusion, a prototype CNT microelectrode array has been developed. Several critical aspects of CNTs as neural stimulating electrodes were investigated. The advantageous electrochemical, mechanical, and chemical properties of CNTs suggest that they are capable of providing a safer and more efficacious solution for neural stimulation.

Thank you for your attention,

P.S. Contact me for confirming your interest to attend and for (driving) directions.